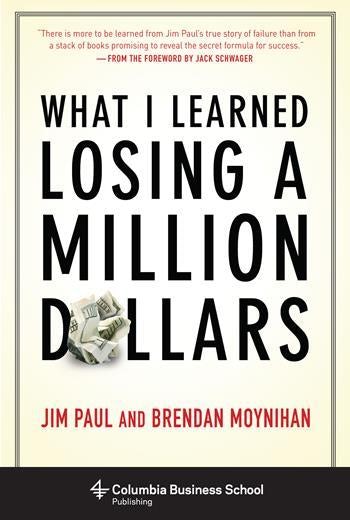 What I Learned By Losing a Million Dollars

Jim Paul's meteoric rise took him from a small town in Northern Kentucky to governor of the Chicago Mercantile Exchange, yet he lost it all—his fortune, his reputation, and his job—in one fatal attack of excessive economic hubris. In this honest, frank analysis, Paul and Brendan Moynihan revisit the events that led to Paul's disastrous decision and examine the psychological factors behind bad financial practices in several economic sectors.

This book—winner of a 2014 Axiom Business Book award gold medal—begins with the unbroken string of successes that helped Paul achieve a jet-setting lifestyle and land a key spot with the Chicago Mercantile Exchange. It then describes the circumstances leading up to Paul's $1.6 million loss and the essential lessons he learned from it—primarily that, although there are as many ways to make money in the markets as there are people participating in them, all losses come from the same few sources.

Investors lose money in the markets either because of errors in their analysis or because of psychological barriers preventing the application of analysis. While all analytical methods have some validity and make allowances for instances in which they do not work, psychological factors can keep an investor in a losing position, causing him to abandon one method for another in order to rationalize the decisions already made. Paul and Moynihan's cautionary tale includes strategies for avoiding loss tied to a simple framework for understanding, accepting, and dodging the dangers of investing, trading, and speculating.

"Personalizing successes sets people up for disastrous failure. They begin to treat the success as a personal reflection rather than the result of capitalizing on a good opportunity, being at the right place at the right time, or even being just plain lucky."

"That taught me that there are people for places, places for people. You can do some things and you can’t do other things. Don’t get all upset about the things you can’t do. If you can’t do something, pay someone else who can and don’t worry about it."

"However, all losses can be categorized either as (1) internal, such as self-control, esteem, love, your mind, or (2) external, such as a bet, a game or contest, money."

The second is a tendency to interpret the probability of successive independent events as additive rather than multiplicative. In other words, people view the chance of throwing a given number on a die to be twice as large with two throws as it is with a single throw— like throwing sixes four times in a row in craps and thinking that must mean their chances of throwing a seven next have improved.

The third is the belief that after a run of successes, a failure is mathematically inevitable, and vice versa. This is known as the Monte Carlo fallacy. A person can throw double sixes in craps ten times in a row and not violate any laws of probability because each of the throws is independent of all others.

Fifth is people’s tendency to overestimate the frequency of the occurrence of infrequent events and to underestimate that of comparatively frequent ones after observing a series of randomly generated events of different kinds with an interest in the frequency with which each kind of event occurs. Thus, they remember the “streaks” in a long series of wins and losses and tend to minimize the number of short-term runs.

Sixth is people’s tendency to confuse the occurrence of “unusual” events with the occurrence of low-probability events. For example, the remarkable feature of a bridge hand of thirteen spades is its apparent regularity, not its rarity (all hands are equally probable). As another example, if one holds a number close to the winning number in a lottery, he tends to feel that a terrible bad stroke of misfortune has caused him just to miss the prize.

"If the opportunity-defining criteria aren’t met, you don’t act."

"The next step in decision making is establishing controls, i.e., the exit criteria that will take you out of the market either at a profit or loss."

"“The first step in planning is to ask of any activity, any product, any process or market, ‘If we were not committed to it today, would we go into it?’ If the answer is no, one says, ‘How can we get out— fast?’”

"The only way to combat falling into the opinion trap is to follow Rand’s lead: think before you answer— if you even answer."

The Dialogues of Socrates

The Power of Habit