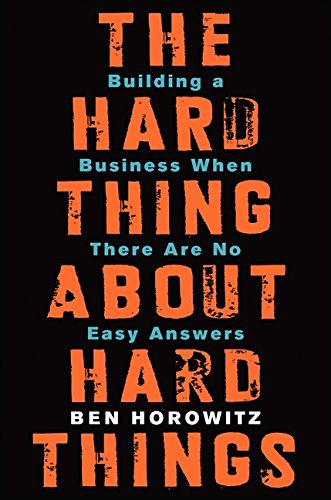 A lot of people talk about how great it is to start a business, but only Ben Horowitz is brutally honest about how hard it is to run one.

In The Hard Thing About Hard Things, Ben Horowitz, cofounder of Andreessen Horowitz and one of Silicon Valley's most respected and experienced entrepreneurs, draws on his own story of founding, running, selling, buying, managing, and investing in technology companies to offer essential advice and practical wisdom for navigating the toughest problems business schools don't cover. His blog has garnered a devoted following of millions of readers who have come to rely on him to help them run their businesses. A lifelong rap fan, Horowitz amplifies business lessons with lyrics from his favorite songs and tells it straight about everything from firing friends to poaching competitors, from cultivating and sustaining a CEO mentality to knowing the right time to cash in.

His advice is grounded in anecdotes from his own hard-earned rise—from cofounding the early cloud service provider Loudcloud to building the phenomenally successful Andreessen Horowitz venture capital firm, both with fellow tech superstar Marc Andreessen (inventor of Mosaic, the Internet's first popular Web browser). This is no polished victory lap; he analyzes issues with no easy answers through his trials, including:

demoting (or firing) a loyal friend;

whether you should incorporate titles and promotions, and how to handle them;

if it's OK to hire people from your friend's company;

how to manage your own psychology, while the whole company is relying on you;

what to do when smart people are bad employees;

why Andreessen Horowitz prefers founder CEOs, and how to become one;

whether you should sell your company, and how to do it.

Filled with Horowitz's trademark humor and straight talk, and drawing from his personal and often humbling experiences, The Hard Thing About Hard Things is invaluable for veteran entrepreneurs as well as those aspiring to their own new ventures.

What am I not doing?

As a leader, always ask yourself, “What am I not doing?” This question will often reveal some of the blind spots in your approach and strategy.

It’s easy to look only at what’s going well and act on those positive results while ignoring or explaining away the things that aren’t going well. Avoid this trap. It will leave you with fewer insights and a strategy with potential holes.

Nobody wants to hear your excuses about why something didn’t get done or didn’t go as planned. Instead of focusing on detailing what happened, focus on what you can do to improve the situation and do better next time.

When interviewing, it’s easy to go with the well-rounded candidate who is good in many areas and doesn’t have any identifiable weaknesses. But this can be a big mistake. Instead of hiring for a lack of weaknesses, hire for strengths. So if someone has amazing technical capabilities and average communication skills, hire that person over the candidate who is good, but not great at either skill.

Training requires clear expectations. Write a document that clearly articulates what a successful vs. unsuccessful person looks like in the role. Without proper expectation setting, performance management is sloppy and inconsistent.

To have strong group communication, you need to define the process and structure of communications. For example, the expectations and purpose of every meeting should be very clear.

Trust is essential to facilitating healthy and successful professional interactions. If people trust you, they will listen to you, even if you are not as articulate as you could be.

Feedback is incredibly delicate. The classic advice of giving a “shit sandwich” may work for a new employee, but not for someone more sophisticated. With all of your feedback, be authentic and express a genuine desire to give feedback for the purpose of helping the other person succeed. Be direct. Finally, understand that there is no one size fits all approach for feedback.

"There are no shortcuts to knowledge, especially knowledge gained from personal experience. Following conventional wisdom and relying on shortcuts can be worse than knowing nothing at all."

"Former secretary of state Colin Powell says that leadership is the ability to get someone to follow you even if only out of curiosity."

"During this time I learned the most important rule of raising money privately: Look for a market of one. You only need one investor to say yes, so it’s best to ignore the other thirty who say “no.”"

"No matter who you are, you need two kinds of friends in your life. The first kind is one you can call when something good happens, and you need someone who will be excited for you. Not a fake excitement veiling envy, but a real excitement. You need someone who will actually be more excited for you than he would be if it had happened to him. The second kind of friend is somebody you can call when things go horribly wrong— when your life is on the line and you only have one phone call. Who is it going to be? Bill Campbell is both of those friends."

"An early lesson I learned in my career was that whenever a large organization attempts to do anything, it always comes down to a single person who can delay the entire project."

"Startup CEOs should not play the odds. When you are building a company, you must believe there is an answer and you cannot pay attention to your odds of finding it. You just have to find it. It matters not whether your chances are nine in ten or one in a thousand; your task is the same."

"Sadly, there is no secret, but if there is one skill that stands out, it’s the ability to focus and make the best move when there are no good moves."

"My single biggest personal improvement as CEO occurred on the day when I stopped being too positive."

"“We take care of the people, the products, and the profits— in that order.” It’s a simple saying, but it’s deep. “Taking care of the people” is the most difficult of the three by far and if you don’t do it, the other two won’t matter. Taking care of the people means that your company is a good place to work. Most workplaces are far from good. As organizations grow large, important work can go unnoticed, the hardest workers can get passed over by the best politicians, and bureaucratic processes can choke out the creativity and remove all the joy."

"Given this stress, CEOs often make one of the following two mistakes: 1. They take things too personally. 2. They do not take things personally enough."

"As CEO, there will be many times when you feel like quitting. I have seen CEOs try to cope with the stress by drinking heavily, checking out, and even quitting. In each case, the CEO has a marvelous rationalization about why it was okay for him to punk out or quit, but none of them will ever be great CEOs. Great CEOs face the pain. They deal with the sleepless nights, the cold sweats, and what my friend the great Alfred Chuang (legendary cofounder and CEO of BEA Systems) calls “the torture.” Whenever I meet a successful CEO, I ask them how they did it. Mediocre CEOs point to their brilliant strategic moves or their intuitive business sense or a variety of other self-congratulatory explanations. The great CEOs tend to be remarkably consistent in their answers. They all say, “I didn’t quit.”"

"Watered-down feedback can be worse than no feedback at all because it’s deceptive and confusing to the recipient. But don’t beat them up or attempt to show your superiority. Doing so will defeat your purpose because when done properly, feedback is a dialogue, not a monologue."

Traction: Get a Grip on Your Business