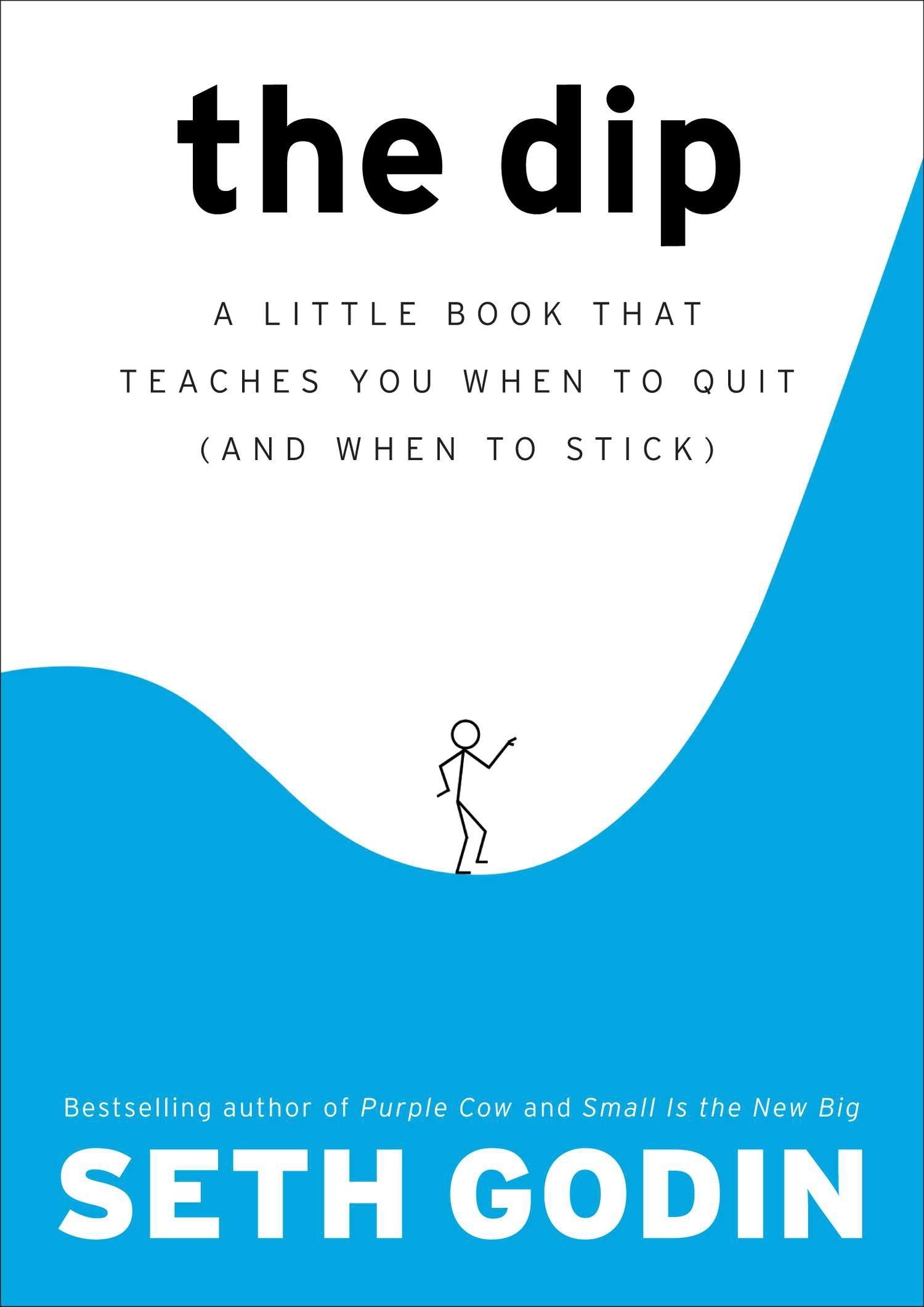 In this iconic bestseller, popular business blogger and bestselling author Seth Godin proves that winners are really just the best quitters. Godin shows that winners quit fast, quit often, and quit without guilt--until they commit to beating the right Dip.

Every new project (or job, or hobby, or company) starts out fun...then gets really hard, and not much fun at all. You might be in a Dip--a temporary setback that will get better if you keep pushing. But maybe it's really a Cul-de-Sac--a total dead end. What really sets superstars apart is the ability to tell the two apart.

Winners seek out the Dip. They realize that the bigger the barrier, the bigger the reward for getting past it. If you can beat the Dip to be the best, you'll earn profits, glory, and long-term security.

Whether you're an intern or a CEO, this fun little book will help you figure out if you're in a Dip that's worthy of your time, effort, and talents. The old saying is wrong--winners do quit, and quitters do win.

The Dip teaches us that, between starting and succeeding, there’s a time of struggle when we should either pursue excellence or quit strategically while helping us choose between the two.

“People settle. They settle for less than they are capable of. Organizations settle too. For good enough instead of best in the world. If you’re not going to put in the effort to be my best possible choice, why bother?”

"The Dip is the long slow slog between starting and mastery. A long slog that’s actually a shortcut, because it gets you where you want to go faster than any other path.”

“Are you over investing time and money so that you have a much greater change of dominating a market? And if you don’t have enough time and money, do you have the guts to pick a different, smaller market to conquer?”

“The next time you’re tempted to vilify a particularly obnoxious customer or agency or search engine, realize that this failed interaction is the best thing that’s happened to you all day long. Without it, you’d be easily replaceable. The Dip is your new best friend.”

“Before you enter a new market, consider what would happen if you managed to get through the Dip and win in the market you’re already in.”

“Seven reasons you might fail to become the best in the world:

"Sales Dip: The Dip hits when you need to upgrade to a professional sales force and scale it up.”

“That’s the goal of any competitor: to create a Dip so long and so deep that the nascent competition can’t catch up.”

“The next time you catch yourself being average when you feel like quitting, realize you only have two good choices: Quit or be exceptional. Average is for losers.”

“Do you know an entrepreneur-wannabe who is on his sixth or twelfth new project? He jumps from one to another ,and every time he hits an obstacle, he switches to a new, easier, better opportunity. And while he’s a seeker, he’s never going to get anywhere.”

“Hence the Dip of market acceptance. The marketers who get rewarded are the ones who don’t quit. They hunker down through the Dip and galvanize and insulate and perfect their product while others keep looking for yet another quick hit.” [48]

“Short term pain has more impact on most people than long-term benefits do, which is why it’s so important for you to amplify the long-term benefits of not quitting. You need to remind yourself of life at the other end of the Dip because it’s easier to overcome the pain of yet another unsuccessful cold call if the reality of a successful sales career is more concrete.” [53]

“Strategic quitting is a conscious decision you make based on the choices that are available to you. If you realize you’re at a dead end compared with what you could be investing in, quitting is not only a reasonable choice, it’s a smart one. Failing, on the other hand, means that your dream is over. Failing happens when you give up, when there are no other options, or when you quit so often that you’ve used up all your time and resources. It’s easy to wring your hands about becoming a failure. Quitting smart, though, is a great way to avoid failing.” [63]

Three Questions to Ask Before Quitting: [66]

“Here’s an assignment for you: Write it down. Write down under what circumstances you’re willing to quit. And when. And then stick with it.”

Building a StoryBrand: Clarify Your Messaging So Your Customers Will Listen