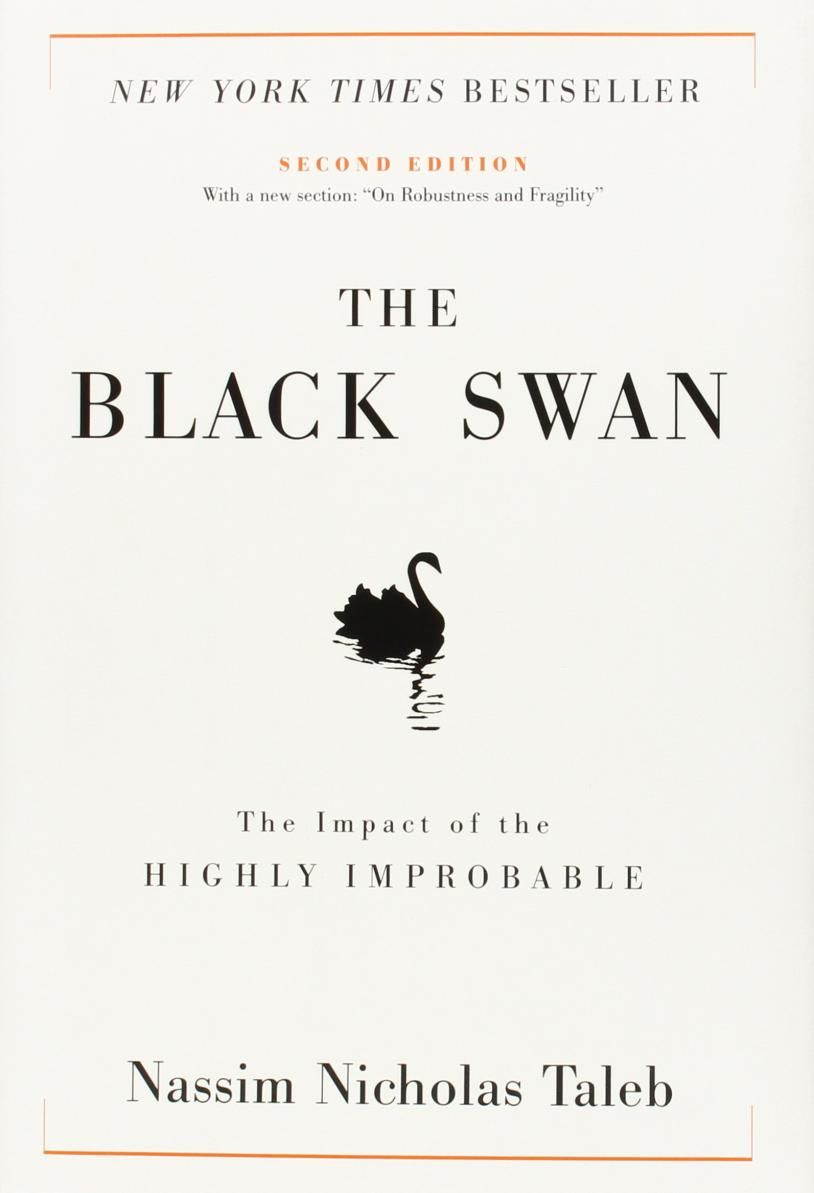 A black swan is a highly improbable event with three principal characteristics: It is unpredictable; it carries a massive impact; and, after the fact, we concoct an explanation that makes it appear less random, and more predictable, than it was.

The astonishing success of Google was a black swan; so was 9/11. For Nassim Nicholas Taleb, black swans underlie almost everything about our world, from the rise of religions to events in our own personal lives.

Why do we not acknowledge the phenomenon of black swans until after they occur? Part of the answer, according to Taleb, is that humans are hardwired to learn specifics when they should be focused on generalities.

We concentrate on things we already know and time and time again fail to take into consideration what we don’t know. We are, therefore, unable to truly estimate opportunities, too vulnerable to the impulse to simplify, narrate, and categorize, and not open enough to rewarding those who can imagine the “impossible.”

For years, Taleb has studied how we fool ourselves into thinking we know more than we actually do. We restrict our thinking to the irrelevant and inconsequential, while large events continue to surprise us and shape our world. Now, in this revelatory book, Taleb explains everything we know about what we don’t know. He offers surprisingly simple tricks for dealing with black swans and benefiting from them.

Elegant, startling, and universal in its applications The Black Swan will change the way you look at the world. Taleb is a vastly entertaining writer, with wit, irreverence, and unusual stories to tell. He has a polymathic command of subjects ranging from cognitive science to business to probability theory.

The Black Swan is a landmark book – itself a black swan.

The Black Swan explains to readers the possibilities of the impossible happening and how to keep themselves from self-induced devastation.

A Black Swan has three characteristics:

"The payoff of a human venture is, in general, inversely proportional to what it is expected to be.”

To make a killing in some industry, you need to do something beyond the currently conceived realm of possibilities .

If People once believed all swans were white until a black swan one day appeared.

The people who cannot see that “impossible” things are possible of happening can quickly have their life turned upside down.

Humans are prone to predict the future based on the past, leaving much room for a shock.

The way the brain sorts the things we learn makes it hard to guess what will happen next since the modern-day is so complex.

Many people hold unshakeable truths that can quickly put them at risk.

"Indeed, in some domains— such as scientific discovery and venture capital investments— there is a disproportionate payoff from the unknown, since you typically have little to lose and plenty to gain from a rare event."

"The strategy for the discoverers and entrepreneurs is to rely less on top-down planning and focus on maximum tinkering and recognizing opportunities when they present themselves. So I disagree with the followers of Marx and those of Adam Smith: the reason free markets work is because they allow people to be lucky, thanks to aggressive trial and error, not by giving rewards or “incentives” for skill. The strategy is, then, to tinker as much as possible and try to collect as many Black Swan opportunities as you can."

"In general, positive Black Swans take time to show their effect while negative ones happen very quickly— it is much easier and much faster to destroy than to build."

"Recall the distinction between Mediocristan and Extremistan in Chapter 3. I said that taking a “scalable” profession is not a good idea, simply because there are far too few winners in these professions. Well, these professions produce a large cemetery: the pool of starving actors is larger than the one of starving accountants, even if you assume that, on average, they earn the same income."

"This same point can be generalized to life: maximize the serendipity around you." (this is why I started GradSchool to try and bring the serendipity of the Bay Area to everyone with access to the internet).

"What you know cannot really hurt you"

"To slowly distill my single idea, I wanted to become a flâneur, a professional meditator, sit in cafés, lounge, unglued to desks and organization structures, sleep as long as I needed, read voraciously, and not owe any explanation to anybody."

"But modern reality rarely gives us the privilege of a satisfying, linear, positive progression: you may think about a problem for a year and learn nothing; then, unless you are disheartened by the emptiness of the results and give up, something will come to you in a flash."

"Have you ever wondered why so many of these straight-A students end up going nowhere in life while someone who lagged behind is now getting the shekels, buying the diamonds, and getting his phone calls returned? Or even getting the Nobel Prize in a real discipline (say, medicine)? Some of this may have something to do with luck in outcomes, but there is this sterile and obscurantist quality that is often associated with classroom knowledge that may get in the way of understanding what’s going on in real life."

"I propose that if you want a simple step to a higher form of life, as distant from the animal as you can get, then you may have to denarrate, that is, shut down the television set, minimize time spent reading newspapers, ignore the blogs."

"As you give someone more info, the more they will refine and create predictions, and the more wrong they will end up being. They will interpret random noise as valuable data."

"Sir Francis Bacon commented that the most important advances are the least predictable ones, those “lying out of the path of the imagination.”"

"In reality, languages grow organically; grammar is something people without anything more exciting to do in their lives codify into a book. While the scholastic-minded will memorize declensions, the a-Platonic non nerd will acquire, say, Serbo-Croatian by picking up potential girlfriends in bars on the outskirts of Sarajevo, or talking to cab drivers, then fitting (if needed) grammatical rules to the knowledge he already possesses."

"To borrow from Warren Buffett, don’t ask the barber if you need a haircut— and don’t ask an academic if what he does is relevant."

Extremistan is the unexpectable, Black Swan world of financial markets, book sales, and death by terrorism.

"Consider a turkey that is fed every day. Every single feeding will firm up the bird’s belief that it is the general rule of life to be fed every day by friendly members of the human race “looking out for its best interests,” as a politician would say. On the afternoon of the Wednesday before Thanksgiving, something unexpected will happen to the turkey. It will incur a revision of belief."

"Its confidence increased as the number of friendly feedings grew, and it felt increasingly safe even though the slaughter was more and more imminent."

"If you survive until tomorrow, it could mean that either a) you are more likely to be immortal or b) that you are closer to death. Both conclusions rely on the exact same data."

Black Swans are relative to your knowledge and expectations, what is a Black Swan to some may be completely expected to others. The butcher is not surprised before Thanksgiving, but the Turkey is.

Avoid situations where you can be a fool in a huge way, avoid dependence on large potentially harmful predictions.

We can learn things in one area and fail to transfer them to another, knowing that all squares are rectangles but not all rectangles are squares does not seem to help us realize that all muslims are not terrorists.

When looking back at history, we tend to construct an interpretation that fits into a nice story, when it's likely that what actually occurred was much more random and unplanned. We want to believe there was a nice clear progression, and that it was predictable, when really it wasn't.

"The way to avoid the ills of the narrative fallacy is to favor experimentation over storytelling, experience over history, and clinical knowledge over theories."

The Danger of Averages: When you measure "averages" in extermistan, you run the risk of getting useless and dangerous information. If you cross a river that is, on average, 4 feet deep, you will likely drown.

Missing a train is only painful if you run after it, if you allow yourself to care

You can stand above society and the pecking order by choice. By creating your own idea of success.

"Quitting a high-paying position, if it is your decision, will seem a better payoff than the utility of the money involved (this may seem crazy, but I’ve tried it and it works). This is the first step toward the stoic’s throwing a four-letter word at fate. You have far more control over your life if you decide on your criterion by yourself."

The Lessons of History

You Are a Badass